Happy New Year everyone! I’m not the biggest fan of New Year’s resolutions in the traditional sense, but rather, I like to use January as a time to reflect on the previous year and focus on setting goals for the new year.

Traditional resolutions are things like “I will go to the gym more” or “I will do a sketch a day”. The problem with these is that once you start going to the gym less than intended, or when you miss a day of sketching, you feel like you have failed your resolution, making it much easier to quit it. These resolutions often feel more like wishes. They are also hard to quantify (how much is ‘working out more’?).

New Year’s Goals, however, are things like “I will lose 15 pounds” or “I will release a 10 page comic book in print”. Because there is a real accomplishment in sight, even if you take a week off from working on this project, you can always get right back towards finishing it! These are much harder to fail, they are much more concrete, and they are completely quantifiable (you either finish it or you don’t).

So to practice what I preach, here is a list of projects I intend to finish this year. This is completely a sneak peek to my loyal blog readers and have not yet been announced anywhere else!

I am sure other unexpected projects will arise as the year goes on, but this is the current projection. I may update this post throughout the year with links to projects as they get released! Good luck on your New Year’s Goals!

I can’t believe it’s been three years since my last YouTube video! That being said, I’m back – this time with my 8-bit cover of the theme song from the popular animated TV show Attack On Titan! I have a few more 8-bit songs in the pipeline… one thing at a time though; watch the video here:

The ‘Titan’ theme was a suggestion by one of my YouTube subscribers named “Arch Angel.” While I have only seen the first episode, I am familiar with the show and with the theme song. With the live action trailer dropping last week, I knew it was a perfect time to make this! I also worked hard to learn how to create much better pixel art and step up my NES animation for this video. Check out my new intro and outro animation too!

Please make sure to leave a comment on the YouTube video to let me know what you think! And be on the lookout for the next chiptune jam! 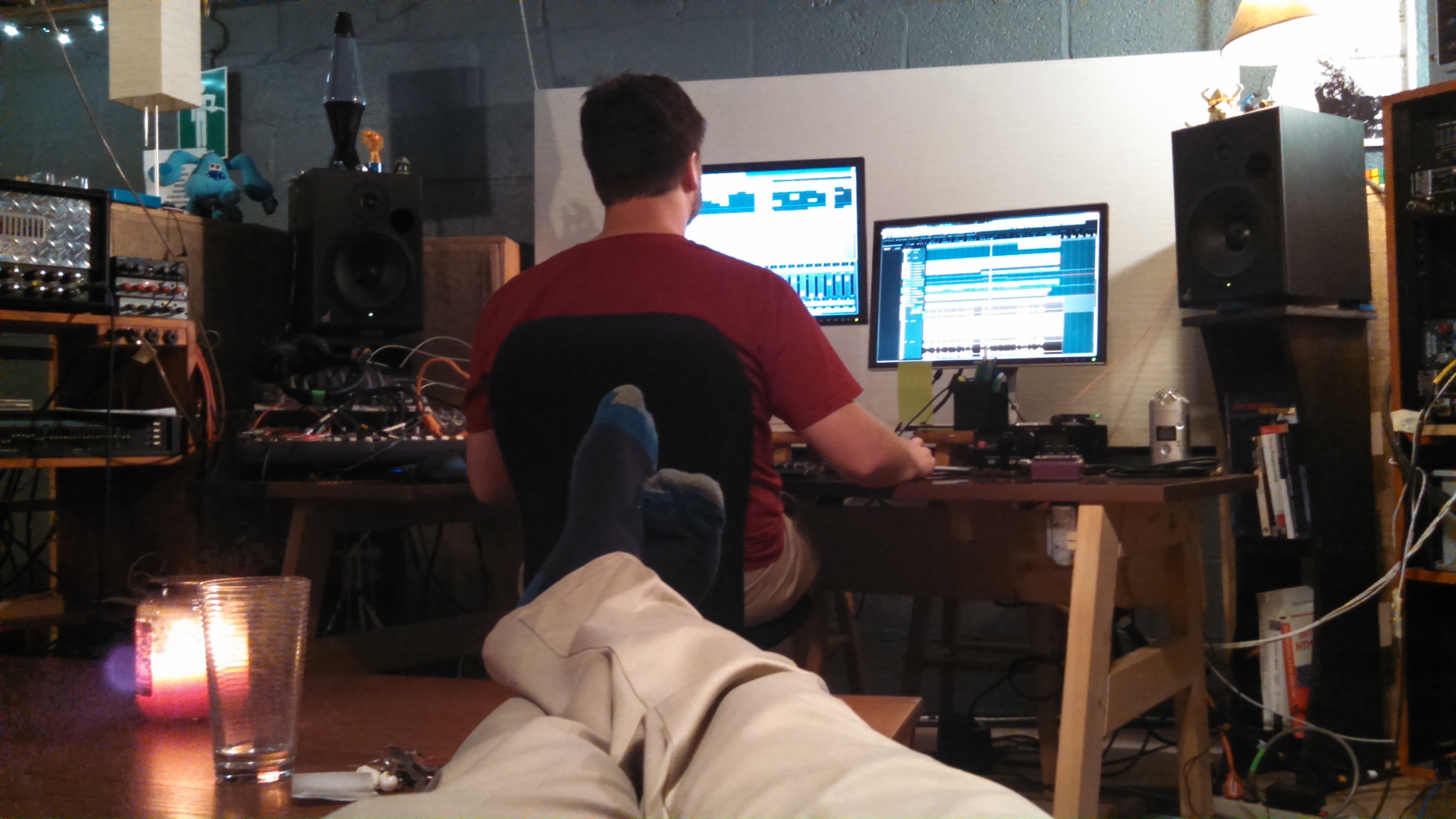 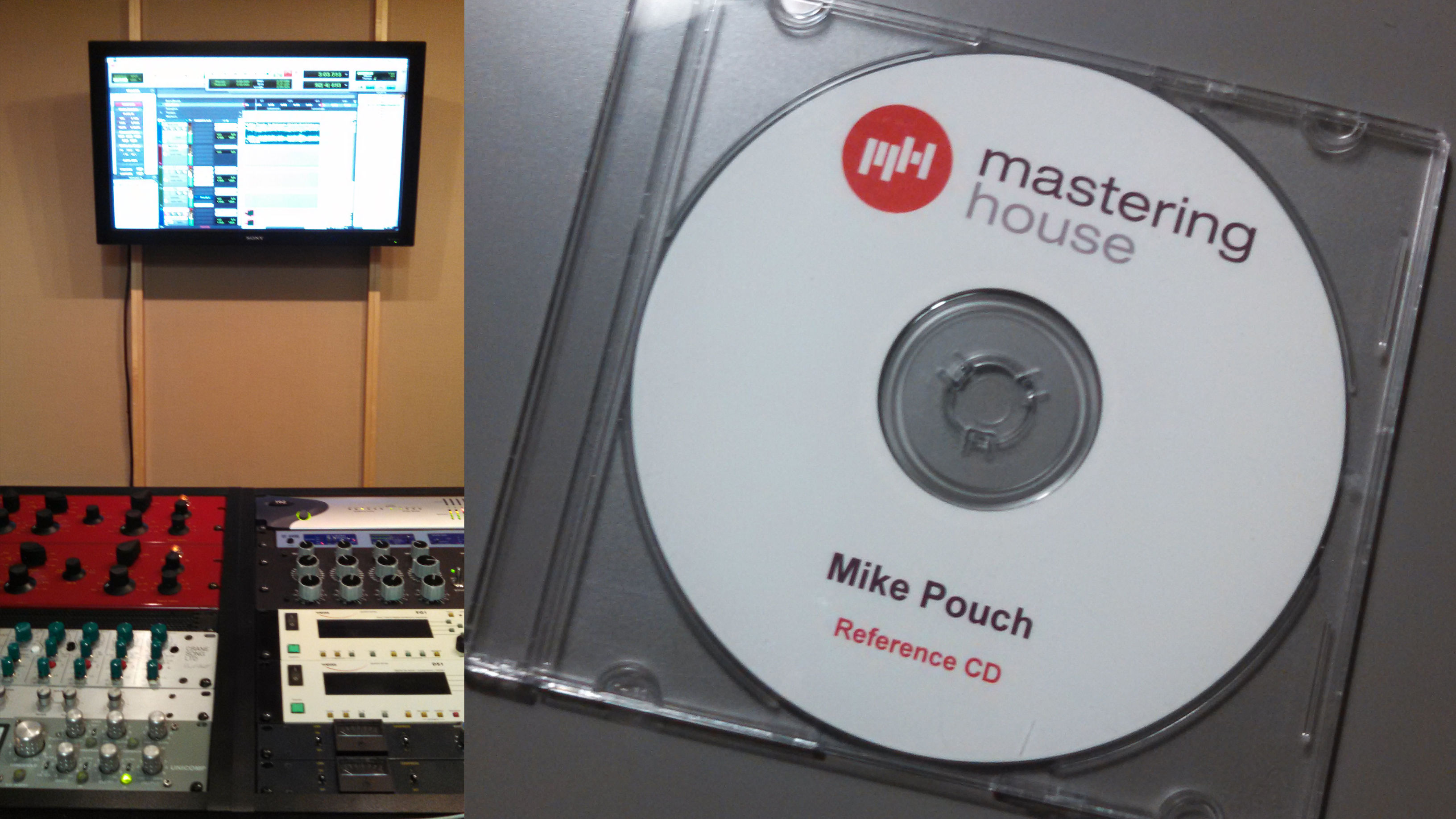 Mastering with Tom at the Mastering House: DONE.

That’s right! The music portion of the album is finished and ready to be shipped!

All that is left to be done is the album artwork and then promotion (perhaps a music video for ‘The Littlest Kiss’ involving sticky notes…)!

I have just posted another 8-bit track! This is an older one… but I think the quality still mostly holds up.

I’ve been doing a lot of thinking about these 8-bit tracks though:
First, there’s a reason my Halo 8-bit is at almost 50,000 views and growing at a rapid rate (I get a few comments daily), and my Mario 64 and Sonic 8 bit tracks aren’t even breaking 300. This could be for a few reasons, but I think the main thing is that making retro versions of games that are already semi-retro isn’t extreme or cool enough for people to search. They just don’t stand out. As well, a Nintendo version of Halo just seems strange because the franchise didn’t exist in the 80s/90s. Also, having a picture/animation probably helps a bit too! So… I need to find better games/movie soundtracks/songs to do 8 bit covers of (any suggestions?!)! As well, I should include some kind of 8-bit artwork!

Second, this is more for the blog, but I am going to stop doing a big ‘making of’ for each track. I’ve said most of my techniques, so I don’t want to repeat myself too much. In addition, I’m sure most of my readers don’t make 8 bit music, so the blog will mostly go unread or be uninteresting. Although, I think I will, at some point, do a series all about making 8-bit music that covers all the main techniques with included examples.

So with all that being said, I do have a few more ‘older’ tracks to post over the next few months. I have 8-bit versions of one more Mario 64 song, one more Sonic, a Zelda Wind Waker track, and the Professor Layton puzzle music. I also want to release some ‘Originals’ too! As well, I still have at least five Nintendo versions to post next month to celebrate the 20th anniversary of something! Should be awesome and might develop into a whole twelve song album release! Details on that next month!!!

Hello dear readers! I know it’s been exactly a month since my last post… I apologize. This summer has left me rather busy catching up on life and catching up on bills, paying people back money I owe (all paid back now!), and struggling with a car on the fritz! Yowza! During the year, I work a consistent weekly job at a school with consistent pay, but, being at a school, I am let go for the summer. So in the meantime, I’ve been finding odd jobs/freelance work in order to pay the bills. It’s been consistent enough where I haven’t had any major problems, but it’s left less time for music, sadly.

So in short, I haven’t forgotten my readers (and listeners)! I think once September returns and I have consistent work again, I’ll be able to work on things and post more often! I still have big plans for an awesome September remix or two (celebrating a 20th year anniversary of something…) and a TON of 8-bit remixes in October (to celebrate the three year anniversary of something else!!!) As well, my EP is still in the works… and still being delayed. Heh. It’ll be finished this year, for sure!

Well, onto the 8-bit remix! This one is for Sonic 3’s Ice Cap Zone (one of my fav Sonic tracks!) Once again, I made this one a little while ago, so it’s hard to remember all the details, but I’ll speak on what I can remember:

Drums and effects: I made the hi/hat metal sound with the noise channel, with a Duty/Noise at 25%. This gives a more metallic sound than the usual ‘white noise’. You can hear this effect used extensively in the famous Mega Man 2 – Quick Man stage. As well, the backwards ‘sweep’ sound was a simple noise channel track with a reversed volume slope. I used a simple ‘kick’ wav sample on every quarter note on the DCIM channel. Pretty basic stuff there, but it works well.

Instruments: The bassline was simple – just the triangle channel (as used in most NES tracks.) For the intro parts, I have two square channels with a little bit of a fade-in with the volume channel. This gives it more of a ‘pad synth’ feel, much like the original. For the ‘chorus’ part I have one square channel playing the melody – once again, pretty basic stuff. For the arpeggios, though, things get a little bit trickier. In the instrument editor, the arpeggio tool only goes from -10 to positive 10. This means you can’t do octaves at -12 to 0, which would be ideal. In order to achieve the arpeggios the way I needed, I set them at ‘-6, -6, 6, 6’ – which means in order to play the notes I wanted, I’d have to play a 6 half tones higher (example: to get a G I’d have to play a C#.) Here’s a picture of the editor: 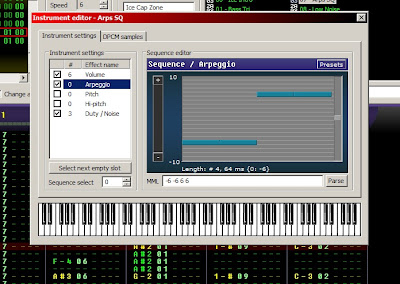 Well that’s pretty much it! Here’s the track!

As always, thanks for reading!
-Pouch!